01 Jan2015 Investment Outlook: The Good, the Bad and the Not-So-Ugly

Predictions beyond a quarter or two aren’t based on much data or fact, so let’s agree to take this to mid-2015, shall we? You’ll not get from me where the DOW or NASDAQ will finish in 2015. 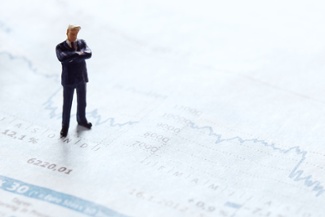 You see, prognosticating is what the consumer wants — investors, that is. So while we’ll give what you want, data and facts are what we’ll use to offer a vision for the future, rather than subjective, gut feelings that analysts or economists may use in formulating their 2015 predictions.

It’s always fun to look back at the predictions and see who got what right and who got what wrong. I’d say on the whole, the top economists’ forecasts did get a lot right for 2014. Most were predicting healthy growth, tame inflation, low interest rates, rising stock prices, and declining unemployment — and that’s just what we got.

So, what did I predict last year? It won’t surprise you to re-read that it wasn’t an earth-shattering insiders view of edgy prognostication, but I was right:

One of the major themes that is in place at the start of 2014 is the leadership of Domestic Equity, or “stocks.” Out of the six broad asset classes that I track, Domestic Equity remains the top ranked asset class, and that continues to be the case today. In other words, this continues to be a strong area of the market and one that I will continue to focus on. Additionally, nearly 75 percent of all stocks trading on the New York Stock Exchange are in a positive trend today, which is to say that the majority of stocks continue to show positive trends. I should note, also, that all of the major equity indices continue to trade in a positive trend, which is another positive sign for the market.

Indeed, Domestic Equities were the place to be in 2014 and the US markets were all positive and quite strong in 2014.

Here’s what we think the 2015 investment outlook looks like (drum roll, please…):

This is when you hear that game show “whan, whan, whannn…” as the participant loses the game.

Sorry, folks — no drama, no sparks.  No sell off, yet no fireworks seen in sight. Slow and steady wins the race, is what I see from the current data.

Why? Tune in for the Good, the Bad, and the Not-So-Ugly:

Oil’s plunge has driven down prices for gasoline, home heating oil, jet fuel and more.  Thanks in large part to this plunge, the Federal Reserve has sharply cut its forecast, saying that inflation will run between 1% and 1.6% in 2015. That’s down from a September forecast of 1.6 percent to 1.9 percent. What economists got mostly wrong last year was the overwhelming predictions of higher rates.

In January 2014 the 30-year fixed-rate mortgage was averaging a rate of 4.43%. Most economists thought that rates would rise, and instead we find the current 30-year rate running at about 3.75%. Of course, all economists and predicting gurus think that this time is different and that rates really will rise in 2015.

I tend to agree — but only with a nominal rise, and not until the second half of the year. Rate hikes should not be feared with the strong Fed leadership that’s committed to gentle changes in the name of stable US markets. 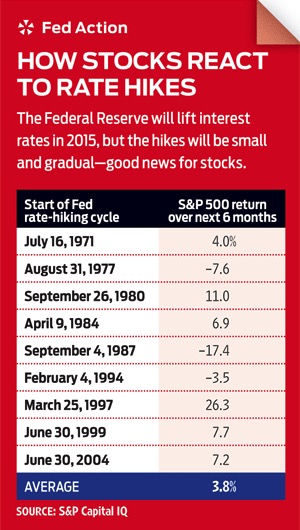 Domestic Equities have occupied the #1 spot on a Relative Strength basis having surpassed or outperformed, International Equities, Bonds, Currency, and Cash since October 2011. With a Relative Strength “tally” of 31% of the rank amongst the other five asset classes, its closest competitor is Bonds and International Equities with  “tallies” of 19%.

Let me break that down for you: Domestic Equities are not in danger of sliding to the #2 or #3 spot anytime soon.

Stocks maintaining a strong hold on the #1 spot is good for future growth prospects of US markets. Next year, and early on, will prove difficult for those who have benefited from buy-and-hold or point-and-shoot investment management — the market returns will come from less stocks and fewer sectors, and will also require a disciplined, focused and narrow approach in order to have a winning portfolio. Volatility will be alive and well, and the selective investor will outperform those in a Vanguard S&P 500 index fund.

I agree with Kiplinger and Gary Pzegeo of Atlantic Trust Private Wealth Management during this year of adjustment:

The market will move less as a cohesive whole as sectors and stocks splinter off in their own directions—in the same way a robust U.S. economy is decoupling from stagnation in Europe and slowing growth in China. Your returns will depend on selecting the right companies in the right markets, rather than relying on a broad-based approach. “Anticipate a lower return trajectory, a bumpier ride and a narrower advance, with more companies getting left behind,” says money manager Gary Pzegeo, at Atlantic Trust Private Wealth Management.

A strong and growing GDP

The gross domestic product — a measure of all U.S. goods and services — has been on the rise, to say the least, since 2009. The latest revision from the Commerce Department shows GDP rising at 5% over July, August and September.  This is quite remarkable, and we yet again have to give thanks to lower energy prices for this growth.  It’s not a far reach to expect lower oil prices to give rise to consumer spending, which should help boost revenues for stores, restaurants, hotels, and more.

As we mentioned last week, Bonds have now taken the #2 spot from International Equities on a Relative Strength basis, up from 3rd place.

Again, as we look to facts and data in offering our 2015 guidance, I largely look to the Relative Strength of the six major asset classes (Domestic Equities, International Equities, Bonds, Currency, Cash, and Bonds).

After holding the #2 spot for the past two years, international equities and bonds are now neck-and-neck for the #2 spot on the scale. But the “nose” of bonds is winning the horse race for the #2 position, as of now.

Additionally, for the first time since July 2010, Cash (the asset class, cash) has moved into the #4 position. Historically, Cash, has been ranked either #5 or #6 (or last and second to last) as ranked by relative strength performance on the asset scale since 2010. Cash moving up on the relative strength asset scale would give great pause had it unseated an asset class such as domestic equities or even bonds. But since the asset classes below Cash are now Currency in the #5 spot and Commodities at #6, it doesn’t sound any alarms. It does warrant mentioning, however, that it hasn’t seen a rank this high on the scale since 2010.

Well, for starters, as investors, we like Cash to be in the #6 spot, or the weakest of the asset performers, because Cash doesn’t earn much these days. Couple that with the idea that Bonds are in the #2 spot, and since bonds aren’t yielding much these days either, this could be a trap for soon-to-be-retirees when rates begin to rise. When rates go up, the almost over $600 billion dollars owned in bond investments, will, well, go down.  While overall bond market issuance has declined about 10.5% since 2013, it has risen from $208 billion in 1996 to an expected $600 billion this year.

Having both of the asset classes that are equity asset classes, Domestic and International Equities in the #1 and #2 spots is the most bullish lineup on the relative strength asset scale. And since this is no longer true, it seems that overall returns have a less bullish outlook, as well.

So, we all recognize there’s a great deal at home and abroad that isn’t all that great.

Herein is where the “Not-So-Ugly” get categorized, because after all, things aren’t really all that bad, given the ratio of Good to Bad, above.  Some of it is what we call “Noise” some of the noise is louder than other noise and warrants more notice—but on the whole, if we focus on the Good, take note of the Bad, the rest will take care of itself.  Quiet the noise.

In the meantime, here’s what made it into the Not-So-Ugly category:

“Not nearly enough people appreciate the risks bubbling up in the Chinese economy. The central government has used its control of four state-run banks to fuel economic growth over the last decade, and I think the bubble will burst in spectacular fashion … eventually. I believe we’ll see the bubble at least begin to burst next year, and the government will scramble to increase high-quality lending, boost the economy, and prop up its markets. Wall Street will still crash because China is seen as the one country where economic growth will never end, and a crack in that thesis will roil markets… Like predicting the financial crisis of 2007 and 2008, it’s impossible to predict how China’s credit bubble will burst (or deflate), how it will impact the global economy, or when it will happen. I just think something bad is looming in China, and the market will take a beating when it comes to light.”

“A slowing Chinese economy might be good or bad for the world, depending on how it affects the relationship between domestic savings and domestic investment, and this itself depends on whether Beijing drives the rebalancing process in an orderly way or is forced into a disorderly rebalancing by excess debt. My best guess is that Beijing will drive an orderly rebalancing of the Chinese economy, even as it drives growth rates down to levels that most analysts would find unexpectedly low, and this will be net positive for the global economy.”

Many said the same of Japan’s economy eons ago and look what a drag that has been on returns since the 80’s/90’s. Be glad you didn’t heed those global slowdown warnings…

Here is no different — until, it is.  In other words, let the noise remain noise until data in the market’s returns show otherwise.

Of course there are other inhabitants that deserve mention and fit the “not-so-ugly” definition, including instability in Russia and stagnation in Europe, but the viewpoint is always the same in “our camp” — don’t let the noise distract you from the returns. Go where the data leads you.

With international equities having been unseated from a top 2 position, be underweight and/or possibly avoid any international holdings. If and when the “Not-So-Ugly” does become truly ugly and affects market returns, the metrics of the “Bad” (see above) will tell investors where to be invested.

There is much to offset the “Not-So-Ugly” out there, and a growing US economy is one, and again (yes, I must say it), lower oil and energy prices is another. Forget my take, the International Monetary Fund says lower oil could boost global economic growth by as much as 0.8 percent above the expected 3.8 percent — this is a pool you want to swim in.

This Bull market is celebrating its 6th year and could see lucky number 7 and even 8. Don’t let fear and noise of the not-so-ugly rob your portfolio in 2015 of the returns that are there for the taking. Stay dialed in to the asset scale line up as reported and tracked for us by Dorsey Wright and Associates — or as published in our quarterly newsletter and on our blog — and let these sources of data alert you to a Russian or Chinese contagion to be dealt with.

Be leery of wide sweeping long-range predictions for next year and beyond. Let data and facts be your portfolio’s guide.