17 MarGo Greenback: Add Some Green to Your Portfolio This St. Patrick’s Day

Make some of your own luck this year and add a four leaf clover or two to your investing line up. Go the way of the greenback. 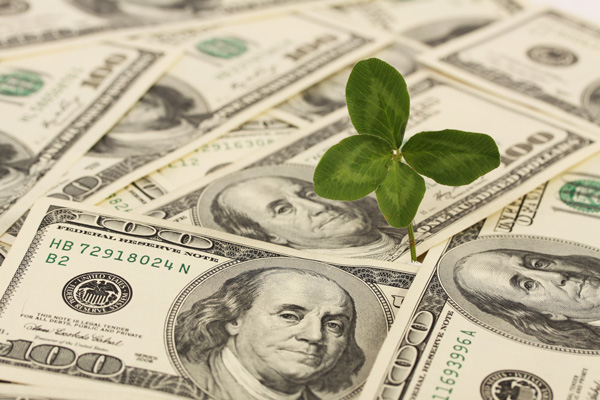 While the four leaf clover rising dollar story may seem “over picked,” this is not a field of clovers that you want to pass up, as there’s more picking to be had!

Over 1,400 days into a rising dollar trend — the largest run dating back to 1985 (and perhaps ever) — get on board with the greenback.

Here’s where past rising dollar trends say the four leaf clovers are:

Don’t take our word for it. Here’s what the awesome research that our friends at Dorsey Wright and Associates have on the Greenback:

So that is the basis for the study — we identified periods when the dollar was rising and periods when the dollar was falling, going back to 1985. The next step was to then look at various asset classes and their respective performance during rising dollar markets and falling dollar markets. We chose investment vehicles representing Domestic Equity, Foreign Equity, Emerging Markets, Domestic Fixed Income, Foreign Currency, Various Equity Styles (Large, Mid, Small, Value, and Growth), and Commodities. The results were interesting as many assets did in fact show meaningful performance biases during either rising or falling dollar markets.

The red bars in the graphics below represent average performance during all falling dollar markets, while the green bars represent average performance by that same asset class during all rising dollar markets. For some assets we did not have data going back to 1985, so returns reflect the average since the time at which we had data, those dates are denoted.

For example, based on the graphic below we can see that the S&P 500 has performed well in both rising dollar and in falling dollar markets, and has averaged positive absolute returns in both during our study period. Generally speaking, in a “rising dollar market,” Small Cap US stocks, Mid Cap US stocks and Growth stocks (though not always Value) tend to do quite well. Interestingly, it has been the Nasdaq 100 [NDX], which just celebrated its 30th anniversary, that has produced the greatest gains during a rising dollar period with an average return of +36%. Meanwhile, strong asset classes during falling dollar periods include Non-US Equity and Commodity indices, as well as Gold. Emerging Markets [EEM] has an average return of 31% during falling dollar periods, followed closely behind by Developed (International) Markets [EFA].

We found the results of this initial study interesting enough to add another layer to it, looking specifically within the US equity market, but sub-dividing it based upon the broad Dow Jones sectors. We had to adjust the time frame of the study a bit based upon data availability, but we have sector index data beginning in 1992, affording ample history for a meaningful data sample. Again, our study includes the 10 broad Dow Jones market sectors (Basic Materials, Consumer Cyclicals, Consumer Non-Cyclicals, Energy, Financials, Healthcare, Industrials, Technology, Telecommunications and Utilities).

Of note, the Basic Materials sector is the best performing group — by far, when the dollar is falling; and also the only sector to post negative absolute returns during rising dollar environments! Energy is the other big beneficiary during a falling dollar market. Conversely, when the dollar is rising, Technology, Financials, Consumer Cyclical, and Healthcare have tended to be the notable winners. One last point on the sector performance is that Energy has historically held up in a rising dollar market, despite its connections to Commodities, having posted returns similar to the market.

So, have your corned beef and cabbage and grab a green beer. But make sure you go greenback, or your portfolio may be out of luck this year.

Above all, if you not a DIY’er and you’re not up for going the way of the greenback on your own, at least get LIBERATED this St. Patrick’s day.  Instead of being lucky, you’ll just be, well, a Liberated Investor.

Or, Go Alpha and we’ll get you GREEN.  Erin Go Braugh ( EIRL may not be a bad place to dip your toe in, in the spirit of St. Patty’s)!