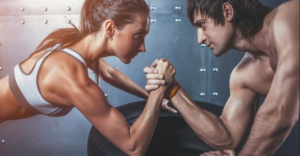 On this week’s battlefield we find Investor Sentiment vs. Contrarian Investors. While most pundits and experts called the post election market move COMPLETELY wrong (and so did I….thank goodness I don’t manage assets based on what I think!), investors are now eyeing the best one week returns on the Dow Jones Industrials since 2011, all time highs on the Dow and very close to all time highs on the S&P 500.  While media “noise” is subsiding, no one can argue that the noise level is still quite high.

So why another “election”?

Americans got to vote and, as they have since 1987, investors get their vote.  Piper Jaffray’s November 2016 issue of The Informed Investor included some great insight on investor sentiment.  Per the report, the market has reached bearish sentiment levels that, from a contrarian standpoint, suggests a positive outlook for equities:

The AAII Investor Sentiment survey, taken weekly since 1987 measures the percentage of individual investors who are bullish, bearish and neutral on the stock market for the next six months.  Of particular interest is the bullish percent number that is a solid contrarian indicator and often shows investors’ complacency/fear at important turning points in the market.

From a historical perspective, the lower decile (bottom 10% readings) of the Bullish % numbers resides at 26%.  For the week ending November 2, 2016, the sentiment survey recorded a bullish % reading of 23.6%, which falls in the bottom decile of all observed values since July 1987 (as shown in the table right below).  From a contrarian perspective, the data suggests a positive bias and that the path of least resistance is likely higher.

From a performance perspective, we went back in history (1987-present) and calculated average and median market returns after such low readings were observed.  We note that the SPX index has been higher over the following 13- and 26-week periods, 74% and 81% of the time respectively.

Additionally, the SPX has recorded positive average returns of 7.7%, six months after weak readings of the Bullish % numbers were observed.

With markets at, and close to all-time highs, one may question the data and suggestion herein that markets could be poised for more.  Why might sentiment be so low? Its likely that the constant focus on the negativity of the recent election has the effect of, not surprisingly, causing people to overlook what may be going right.  Second, the market has been flat to slightly up on a year-over-year basis with what I would call close to unprecedented volatility.  When investors don’t get their expected 7-9 percent a year, amidst sizeable market gyrations, their mood drops (even if we’re not far from all-time highs).

Contrarian indicators such as AAII’s weekly procured investor sentiment survey, predicts best at the extremes. Recent readings in the bottom decile suggest that the coming weeks and months may very well be a surprise to the upside. Fingers crossed, and remember—quiet the noise! #We’veGotYouManaged