01 AugMarkets March Ahead, Consumer Confidence Up

Last week, markets marched ahead within a busy reporting week. The Dow rose 1.16% to close Friday on another new high. The S&P 500 notched a record high during the week, despite closing the week slightly down 0.02%. Meanwhile, the NASDAQ slipped 0.20%, and the MSCI EAFE rose 0.21%.

Generally strong corporate earnings reports helped markets continue to hit highs. The majority of companies that have posted Q2 earnings so far have beaten their estimates. Those earnings performances helped push financials, materials, and energy stocks up by over 1% early in the week. Health care companies also posted substantial earnings as S&P 500 health care stocks have risen 16% this year. Health insurer stocks have also increased by 22%.

A Rundown of Last Week’s Developments

Solid GDP Performance: For the second quarter, GDP came in at a 2.6% annualized rate – one of the strongest quarters in the last two years. GDP growth was based on robust consumer spending for durable and nondurable goods. In addition, business investment hit a solid 5.2% annualized increase for the quarter. 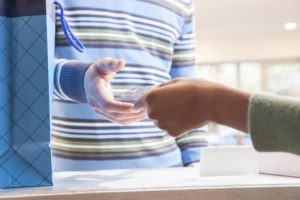 Healthy Consumer Confidence: Consumer confidence remains quite high with the index rising in July almost 4 points to 121.1. The index beat the optimistic estimate of 118 and has jumped approximately 20 points since last November’s election, staying near March’s 17-year high of 124.9. In addition, the consumer sentiment index moved up modestly the last two weeks of July to end at 93.4.

Mixed Home Sales: A tight labor market and low mortgages continue to spur demand for housing. In June, new home sales recorded a strong 610,000 annualized rate. Meanwhile, existing home sales dropped 1.8% in June to an annualized rate of 5.5 million, which was lower than anticipated. Existing home prices, however, were up 6.5% year-over-year, with a median price of $263,800.

The Fed observed in its meeting last week that risks to the economic outlook seem stable. In its analysis of the economy, the Fed pointed to moderate economic growth, a sturdy employment environment, and positive business investments. As expected, the Fed did not increase interest rates but suggested that unwinding its $4.5 trillion balance sheet could begin as early as September.