Enough said. I’ll take two burgers and a side of fries. After all, the burgers are hormone-free. 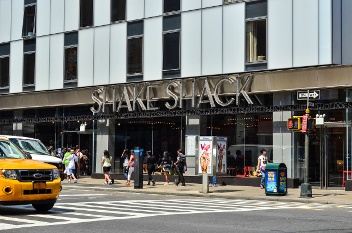 While a Shake Shake in my neighborhood is sure to increase my waistline, we should be asking: “Will it boost my portfolio’s returns? Is today the day to buy?”

Shake Shack’s Initial Public Offering (IPO) happens today with shares to begin trading at $21/share. (By comparison, the average cost of a meal for two is 30 lip smacking buckaroos.)

So what’s a few shares in your Roth IRA gonna cost you?

While Danny Meyer, Shake Shack’s 56-year-old founder with nearly three decades in the restaurant scene, knows a burger and has quite a following, is the stock worthy of investment? And, if so, is today the day to buy if you weren’t “lucky enough” to pick up shares at the IPO price?

Shake Shack’s shares (SHAK), priced at $21 each, values the chain that started as a hotdog cart in a park at about $745 million. Lead underwriters JPMorgan and Morgan Stanley raised $105 million from the initial public offering of five million shares of the stock.

In PricewaterhouseCoopers’ (PwC) “Considering an IPO? The costs of going and being public may surprise you” you’ll see that the inital expenses and onging expenses are ususally more than officers bargained for:

The magnitude and scope of IPO costs can vary significantly from offering to offering based on a number of variables, such as the size of the offering, the complexity of the IPO structure, and the organization’s readiness to be a public company. Factors impacting the cost of an IPO include:

• Longer-term costs such as the need to develop external reporting, investor relations and human resource functions

• Costs to institute incentive plans for executives and employees Unfortunately, only a portion of the costs incurred as part of the IPO are disclosed publicly, which makes tracking and understanding the costs incurred by other companies that have recently become public difficult.

IPO sticker shock is common amongst investors and CEOs. According to PwC, “23% of surveyed CFOs reported that the costs of taking their firm public had exceeded their expectations by a significant amount. In contrast, 13% of the participating CFOs indicated that the costs of managing a public firm were significantly more than they had anticipated before the IPO.”

Typical IPO upfront costs could be as much 7% of gross proceeds of the IPO. So, what does that mean? Very simplistically, it means that if you pay 7% less than the IPO price, perhaps you’ve paid fair value for the burger.

An oversimplification, yes. But short of an over-subscribed technology company IPO that promises double or triple digit earnings and revenue growth, your best bet is to wait for IPO hype to simmer down and buy IPO shares when they trade lower in coming months.

INC reported that the average return for IPOs in 2014 was 16 percent, according to Renaissance Capital, an IPO consultant and researcher.

Of course, you run the risk of never picking up the shares lower. Shares of Alibaba went public in September of last year, raising over $20 million at an IPO price of $68 and now BABA trades at $90. GoPro was another 2014 IPO that you didn’t want to wait for with shares up 55% in week one of trading and now at more than double its IPO price of $24.

While I’d like to not wait for my Shake Shack burger and fries, I’m willing to sit tight for the shares. After all, I see less risk in waiting than paying too much today for what’s already a pretty pricey burger…