02 MayWeekly Update: Is This Bull Market Too Old?

After months of volatility and challenges on the horizon, can the bulls keep running? 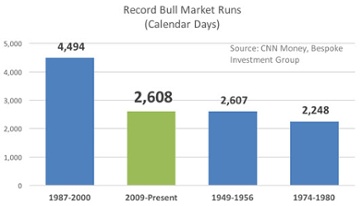 In the pro-bull column, we have a few major points to consider:

Bull markets don’t just die of old age.History shows us that bull markets ended because of a variety of shocks like oil price spikes, recessions, bursting asset bubbles, geopolitical issues, and extreme leveraging.[2] While the past doesn’t predict the future, we should evaluate threats to market performance instead of worrying about birthdays.

Economic indicators support growth. Recessions have accompanied or presaged many previous bear markets. Even when recession risks are higher this year, most economists don’t see an economic downturn in the short-term future.[3]

We have experienced healthy pullbacks. One of the markers of a bull market top is elevated investor optimism and unsustainably high stock valuations. Since the last S&P 500 market high in May of 2015, markets have retrenched several times as investors have taken stock of global risks to growth. We haven’t seen the irrational exuberance that often foreshadows a bear market turn.

In the pro-bear column, we also have some points to weigh in our thinking:

Threats to economic growth from China and Europe may prove too much for markets. We don’t know that we have seen the worst out of China, and a hard landing of the world’s second-largest economy would send ripples throughout the global economy that could threaten markets. Europe is grappling with political, economic, and security issues that could threaten the EU.

The Federal Reserve may bungle monetary policy. The Fed is performing a very delicate dance to bring interest rates closer to historic levels. Raise rates too fast and the economy could stumble; raise them too slowly and the Fed could leave itself unable to fight off another economic slowdown. A monetary policy misstep could trigger a market downturn.

Corporate profits may continue to fall. U.S. companies are struggling to find growth amid challenging global conditions; earnings declined year-over-year for the fifth quarter in a row last quarter, and continued weakness could cause investors to become bearish about U.S. stocks.[4]Our view

The simple truth is that no one can predict market tops or bottoms; plenty of people say they can, but it’s all a matter of educated (or uneducated) guesswork. Instead of trying to call markets, what we do is take a look at overall domestic and international fundamentals and create portfolio strategies that align with our clients’ overall goals in concert with what the data tells us the “temperature reading” of the market is.

There are time tested risk indicators that steered us clear of the last Bear Market in 2008, and called correctly those before such as the Tech bubble in 2000.  But to be clear, calling a top or bottom is guesswork.  A simple chart analysis of SH (inverse of the S&P500—or short the S&P 500) vs SPY (S&P 500) can successfully guide investors in and out of good and bad markets. The key is to be disciplined to its signals and not emotional when the signals trigger.  This SH/SPY chart came within 1 point of signaling a Bear market in February, yet, alas held steady for the Bulls.

We can assume that the current bull market will come to an end someday; to reach the #1 spot it would have to continue through 2021, and that’s a pretty big stretch.[5] Rather than worrying about when the end might come, we’ll adjust portfolio strategies as needed and prudently position our clients for risk.

If you have any questions about market strategies for volatile times, please give our office a call. We’d be happy to speak to you.

Economy grew 0.5% in first quarter. Gross Domestic Product (GDP), the primary measure of overall economic growth, grew just 0.5% on an inflation-adjusted basis, showing that the economy slowed after the fourth quarter of 2015. GDP growth estimates will be adjusted as new data arrives.[7]

Federal Reserve holds interest rates steady. The Fed’s Open Market Committee voted to keep rates where they are out of concern about slowing economic growth. Though rates could increase this summer, some think that the Fed will wait until December to hike.[9]